There are a few old writings that I just have to make a part of my official blog site.  Today I want to honor my dad, Paul Merki.  I shared the following at his funeral nearly 22 months ago.  It’s just a story but his story is a huge part of my story.

If I were to give my thoughts a title, the title would be “Paul Merki, the king of hearts.”  Now, if dad were here I would already be hearing an “Oh JoAnne” but since that never stopped me before, I don’t think I will let it affect me today.

Paul Merki had a heart for his childhood family.  When he was only 11 yrs of age and the oldest of three boys, his father was killed in a tragic accident.  That event changed the course of my dad’s life and was likely the cause of his sensitive heart and his serious nature.  While still a kid himself, he took on the role of “man of the house” as he cared for his mother and brothers.  My siblings and I watched him love and nurture his brothers Bob and Bill for as long as his mind was healthy enough to do so.

Paul Merki had a heart for his nearly life-long love.  He met Mary Ellen Williams when he was 16 and she was 14.  Following a 7 year courtship, he married the woman he loved on August 22, 1953.  Despite the well-known eye rolls accompanied by frequent “Oh Mary Ellens”; everyone who was ever around dad, knew that he loved mom completely.  To tell his story without mentioning her often would only serve to tell half of his story.  They were a team and everyone knew it.  In 1995, I was in Baltimore trying to be of some help following dad’s cancer surgery, when “life tumbled in on him” as he called it.  As I sat at the breakfast table with him and Uncle Bob, we got to talking about his love for mom…a woman who had overcome a difficult childhood herself.  Dad said to me, “I think I made your mom’s life better.  At least I always did my best.”  And he did.  I was about 8-10 years old when I came home from school one day to find mom playing a beautiful brand new Yamaha piano.  My eyes got wide as I asked “Where did you get that?”  Her reply was “Your dad bought it for me.”  At about the same time my eyes landed on a brand new camera.  “And where did you get THAT?”  “Your dad bought it for me.”  It wasn’t Christmas.  It wasn’t her birthday.  And I’m pretty sure there was no powerball involved.  He simply loved mom and made it a life goal to make her life better.

Paul Merki was a man with a heart for his children.  Mom and dad lost their first child – a girl, Ruth Elizabeth, who was born full term and still.  I heard my dad on several occasions speak of the devastation of that event in their lives.  Mom did not get pregnant again quick enough to suit herself and she was lamenting about it to dad one day as they were riding along in the car.  Poor dad never did live down his response to her disappointment…”Well Mary Ellen, I don’t know what you want ME to do about that.”  Apparently, he got it figured out because along came four of us between 1957 and 1963.  We were wanted and we were loved.  Dad made sure we went on family vacations to places I now know they probably couldn’t afford.  He took Steve and Dave bowling after school every Monday.  He took the boys to professional ball games and even insisted that Debbie and I experience at least one game of each sport with them.  He loved Christmas and became our first and best Santa – except for that one Christmas when mom was in the hospital with pneumonia and we got up to find cash and Bibles under the tree.  Maybe Steve thought that was the best Christmas ever but I couldn’t wait for mom to get home.  Dad (and mom) made sure we all got an education at a Christian college; something that was way more than just an education.  Dad (and mom) changed our family tree and I am grateful.

Paul Merki was a man with a heart for his grandchildren.  He delighted in their brains and their beauty and their humor and was always so proud of their accomplishments which have been many.  He was a great-granddad to Benji – something he never really grasped but something he would have loved.  He also would have loved knowing that a second Abby came to him through adoption.

Paul Merki was a man with a heart for his calling.  Mom said this week that she thought dad was called to preach before he was even saved.  I don’t really know how that works but, if it was true of anyone, it was true of dad.  He absolutely loved people…no matter who they were or what they looked like or how they smelled.  He just loved them – and they knew it!  I used to think dad was very black and white in his thinking.  After he retired and moved to Mount Vernon, I saw a different side of him.  I came to see his eyes of grace and listened as he extended that grace to many.  Dave told me that he remembers dad keeping an ash tray in the laundry room in Garfield Heights just in case someone who smoked came in for counseling.  What dad cared about most were souls.  It really mattered to him if the people he would give an accounting for were spiritually sound.  Dad was the unusual blend of preacher and pastor…he did both really well.  Any who were privileged to call him “pastor” will always remember personal wedding ceremonies, funerals and baby dedications.  He had the gift of the pen.  They will also remember sacred and meaningful “Christmas Eve Candlelight Communion at Eight” services.  They will also remember eating many meals (usually at our house) with the parsonage family.  We have received many beautiful notes this week.  This one from Chawn Flemming could be spoken by many of you:  “Last night as Scott and I were talking about your dad and your family he was reminiscing about all the Sunday meals at your house (roast, homemade bread, creamy coleslaw) and how your dad would laugh at the antics even when he didn’t want to sometimes (oh Dave…MaryEllen…) – Scott was always welcomed as a member of the family (even if he wasn’t invited:) I have a heavenly picture of Barbara & Paul (Nannie too:) getting ready & preparing the Sunday meal for the rest of us – complete with a freezer full of chocolate chip cookies.”  And that is who my parents were together.  Open home, open table…welcome even if you weren’t formally invited.  Now, I will say this….if I find dad working in the kitchen in heaven, I will probably faint.

Finally, Paul Merki, my dad, was a man after God’s own heart.  He lived what he preached.  I saw him read his Bible often even when he wasn’t at church.  And I heard him pray often – in our living room kneeling at the ugly plaid chair, at the breakfast table where he made sure we memorized scripture before heading out to school and in church where everyone expected him to pray.  And pray he could.  As teens, we would get our watches synchronized in order to see just how long he would pray.  But as I grew up I knew heaven came to earth when dad prayed. 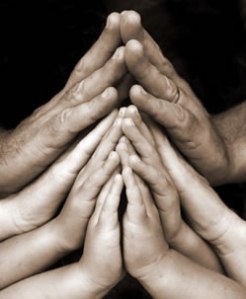 If I ever doubted that dad was truly a man after God’s own heart, he dispelled all doubt a couple of years ago.  Social services would routinely come to dad in the nursing home and administer “memory tests.”  They were never fun to witness and became increasingly painful as his memory faded.  I believe the one I am referencing was the last memory test dad was given and it was administered by dad’s loving nurse Cathy.   “What day is it Paul?”  Nothing.  “What season is it Paul?”  Nothing.  “What date did you get married?”  Nothing. “Ok Paul, here is a pencil and paper.  Try to write a sentence, anything.”  And we waited.  And we watched.  And we waited….   And then the pencil went to the paper and perhaps the greatest testimony ever written by my dad is somewhere in a social worker’s file.  “In the beginning was the Word, and the Word was with God and the Word was God.”  And in one sentence, dad’s foggy mind displayed the core of who he was.  Ok, so maybe he wasn’t the King of Hearts…but he knew the King of Hearts personally and I have no doubt that he is finally with him today. 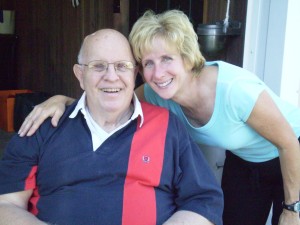